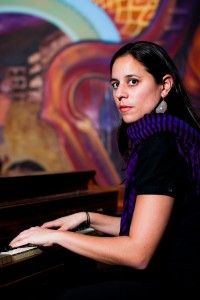 Pianist/Composer Ruthie Dineen was born in Fairfield, CA and began playing piano at an early age. She comes from a vibrant, expressive family, and explored her own creativity through music, studying and playing both jazz and classical music throughout her childhood and into adulthood.

During her college years at UC Berkeley and while studying abroad in Chile and later living abroad in Costa Rica, music remained central in her life through both study and performance.

After completing her graduate studies in Social Work, Dineen decided to focus professionally on music performance and community arts (she is currently the Executive Director at East Bay Center for the Performing Arts in Richmond, CA). In her music she incorporates her vast musical and personal influences, including her Salvadoran-American heritage, classical and jazz musical background, and love for composition and improvisation. In 2010, Dineen returned to formal study in music and in December 2012, graduated from the California Jazz Conservatory with a performance degree in Jazz Studies, where she received the Jamey Aebersold Scholarship. Dineen’s principal piano teachers have included Susan Muscarella (jazz), Katrin Arefy (classical), and in composition Elinor Armer.

Currently, Dineen’s music career is focused on both composition and performance. Dineen is a founding member and co-leader of two original music ensembles, RDL+ and Negative Press Project, with whom she performs, arranges, and composes regularly. From 2015-2019 RDL+ hosted the monthly series “Bay Area Bridges” at Studio Grand in Oakland, CA, where Dineen collaborated with different performing artists each month creating new works of art (including theater, music, dance, poetry, and visual art). In addition to her work with RDL+ and Negative Press Project, Dineen performs with a wide range of jazz, Latin, and classical musicians in the Bay Area, including Bululú.